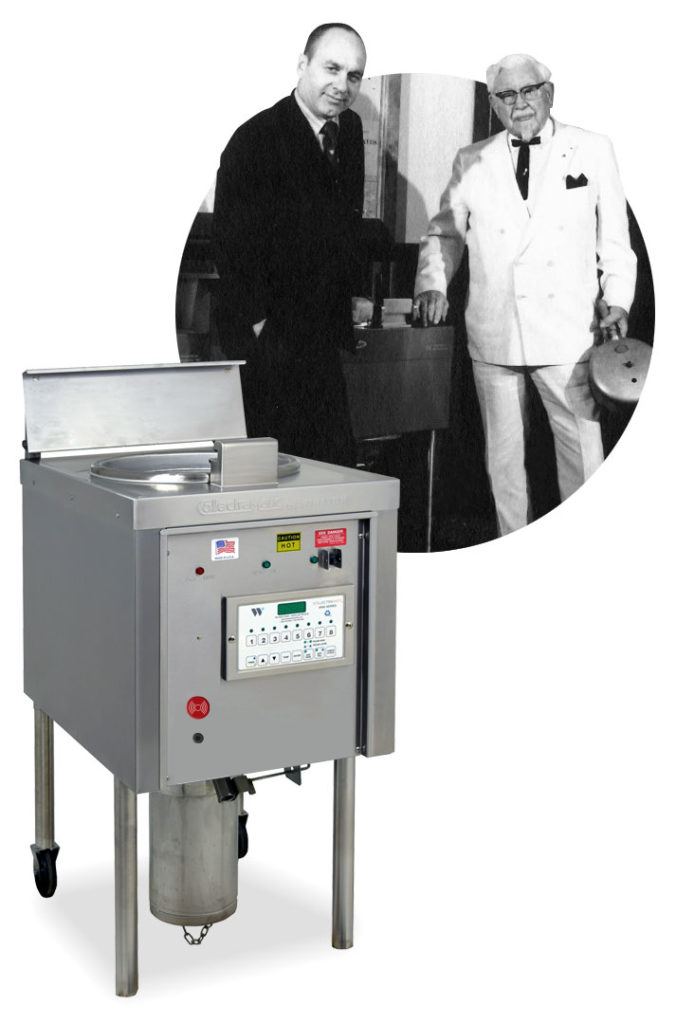 Winston Industries’ history with KFC began in 1967. Our founder Winston Shelton was part owner of Engineering Prototype Services.  He did engineering work there while working full-time as a development engineer for General Electric. His company was hired by KFC to make temperature measurements on chicken being fried in their home canners (known as pots). As he worked on the KFC project, Winston became intrigued by the problems faced by KFC in their kitchens.

Subsequently, he soon had an opportunity to meet Colonel Harland Sanders. Winston’s company was working on a pressure fryer for Mies Filter Products. Carl Mies brought the Colonel to the small shop to see it.

Reflecting on this meeting, Winston said;

"It was then that I began to realize the Colonel’s genius. He was never expressive in my technical terms, but he was a virtual storehouse of food and business wisdom. He created the idea of a “secret recipe” chicken fried in a “home canner,” and was franchising that idea through profit-oriented entrepreneurs world-wide. I became fascinated with automating the pots. If there ever was an engineer’s dream, this was it."

As he listened to the Colonel, Winston gained an understanding of the needs of KFC franchisees, and to the challenges that are characteristic of the fast food industry. Above all, it was critically important to produce consistent high-quality fried chicken safely, using part-time employees who had minimal training. Importantly, a well-designed pressure fryer must allow servicing by store personnel, rather than be dependent upon a service network.

The “official” KFC cooker at that time was the KFC 20-Head Cooker, a huge machine that cost $16,000. While it could produce large quantities of chicken, it cooked inconsistently. Further, the pots required excessive handling of hot shortening. The general consensus at that time was that mechanical filtering was necessary.

However, Winston thought a sedimentation-type gravity filter would do the job without filter paper or filter aids, even while cooking. Subsequently, he began designing a fryer that addressed the need for more consistent quality and less frequent filtering. The collector-based fryer was soon in the prototype stage.

Late in the development of the new fryer, a crisis occurred. A bank employee stole funds from the new company. The bank, thinking Winston was part of the scam, called his company’s loan. Facing the demise of his fledgling company, he decided to ask Col. Sanders for support. 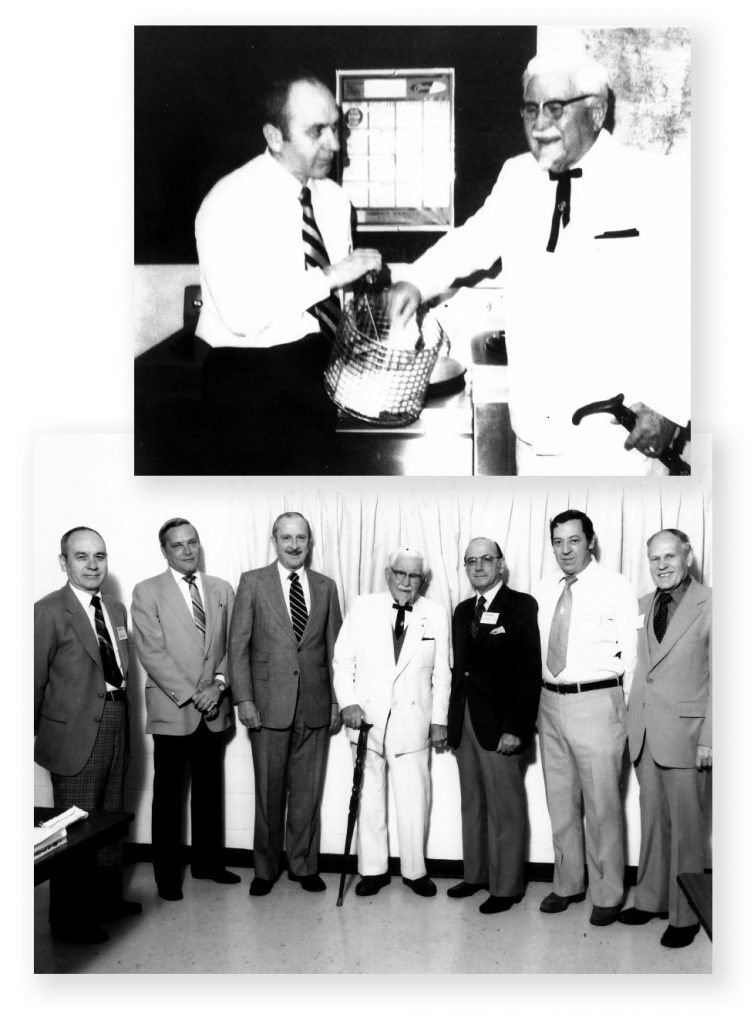 "As I told the Colonel of my plight, he drew back after looking into a prototype of an empty collector at the bottom of the fryer and exclaimed “My God, Winston, you’ve really got something here.” I asked him later to elaborate on his appreciation for what he saw. He said “I could just see this fryer in my stores, cooking chicken round after round without having to handle shortening, don’t you see. And the crackling catcher is going to allow us to make the finest gravy in the world.” Subsequently, he met with the bank, told them of the soundness of the fryer, signed my note for $50,000, and encouraged the bank to help me get the fledgling Collectramatic® pressure fryer idea into production."

Dick Beeson (KFC President) and Winston reached a gentlemen’s agreement that Dick would approve the Collectramatic fryer on the basis of its equivalency to the pots as established by a KFC-conducted taste test. After the test, Dick confirmed the tests established taste equivalency, but said he wasn’t going to approve the Collectramatic fryer. But he didn’t elaborate.

Later, at a regional franchisee meeting, L.S. Hartzog (Hart Biscuit Company) told the Colonel and Winston that KFC couldn’t approve the Collectramatic fryer because of a contract he had with John Y. Brown. L.S. explained that his company had developed the 20-head cooker. The contract selling its design to KFC stipulated that KFC would pay Hartzog $300 for any other automatic fryer sold to KFC franchisees. By this time, Collectramatic fryer had already sold thousands of fryers into the KFC system, producing substantial tension between L.S. and John Y. The stress mounted as franchisees continued buying the fryers at a dizzying pace. 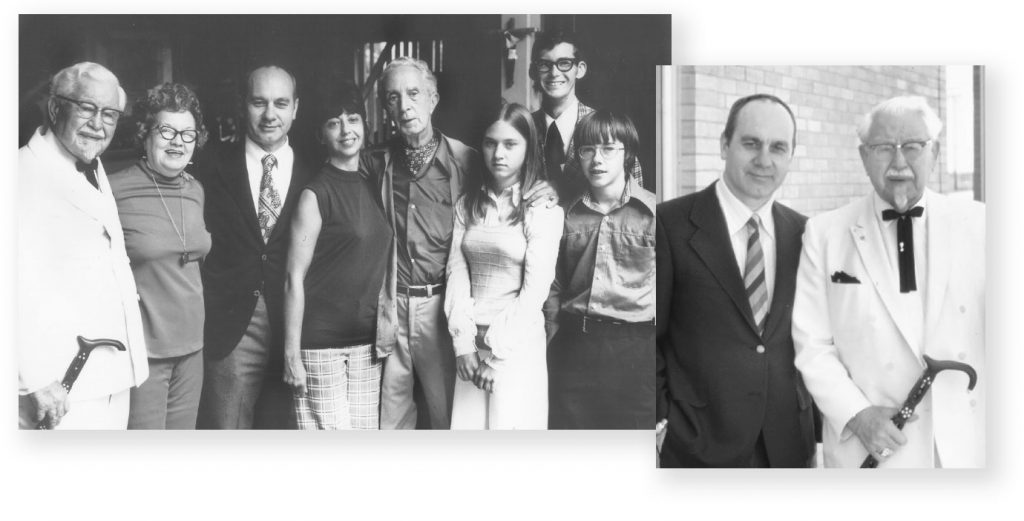 Later, as Heublein acquired KFC, Barry Rowles (Heublein VP/KFC President) told Winston that he was buying Hart Biscuit Company and expected to buy the “big cooker” contract. Once that was done, Barry orchestrated the approval of the Collectramatic fryer.

Over the next three decades, as KFC grew into a global powerhouse, over 26,000 Collectramatic fryers were sold into its system. Collectramatic, Inc. also grew. To better reflect its expanded product line, Collectramatic, Inc. was renamed Winston Industries in 1984. It continues to research better ways to cook and hold food. And it still holds true to the principles inspired by the Colonel, that hard work and integrity aren’t the easy way to do business, but they are the right way.